Spare yourself - The White Devil by Justin Evans 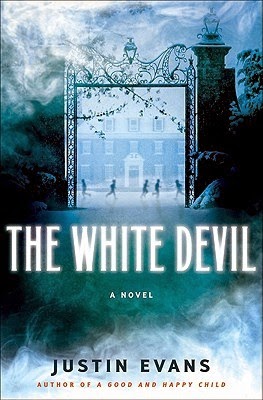 I loved Justin Evans' A Good And Happy Child - loved it - so I was rather enthused to read this one. Sure, I wasn't too struck on the blurb, but that was true of his other book and that turned out to be great.

This one, not so much.

Part of it is not the fault of the book: I am hypersensitised to errors about Britain made by US authors. However, this was inadvertently hilarious.

We begin with a short and threatening prologue which fulfils the role of bad prologues everywhere: making up for the fact little happens in your first chapter. The White Devil opens proper with American student Andrew getting to grips with the oddity that is Harrow. We get parts of the welcome pack, the glossary - but don't worry if you're not paying attention, it doesn't actually make much difference.

Then, Andrew meets Matron, who is cross that he's an American. Later, he meets the other chaps in the 6th Form, all of whom are astounded to meet an American. They tell him to go f**k himself, he calls them assholes, they're all "Woah, mate, bit aggressive, what? That's how we greet each other in England!" Then there's a conversation in which Andrew doesn't know what a gap year is, or what A levels are. Later one of the English people will be completely confounded by the phrase "rain check" but that's okay because Andrew doesn't know what lager is.

Assuming you haven't thrown the book across the room by this point, you have further delights to come: Harrow admits girls! Oh, no wait, just one girl, and that's for reasons which are completely realistic and would totally happen in real life; just like Harrow offering Agriculture as a subject, and Andrew being the only American in the school, and the only new person in the 6th form, and everybody there being white and English (apart from Andrew, oh and Rhys, the Welsh Agriculture student).When a location is (as far as I can tell) so important to the plot it can't be remade as an unnamed public school - as in Patrick Gale's Friendly Fire, which is based on Winchester - you'd better, at least, glance at the website.

I gave it till P78, but even when the story had got going my suspension of disbelief was shot and I was questioning everything (would the police have conducted the interview like that, or does Andrew count as a minor?) Andrews motivation was flimsy. The final scene I read - that of an attempted rape of a child who I fully anticipated finding out was a ghost - pointed too heavily towards public school cliché and, frankly, made me disinclined to read any further.

Terrible. Go and read his other book. That's much better.