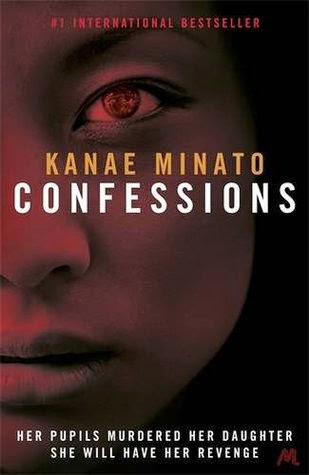 [This ARC was provided to me for the sum of precisely no monies by the publisher, Mulholland books, with thanks to the ever glorious Bookbridgr.]

Everybody has pet likes, and one of mine is Japan. I've never been and likely never will - I have enough problems with English, non-Roman scripts are so far beyond my abilities I'm more likely to pwn Martin Amis in a poetry slam than cope with the Japanese language. If you think I'm joking about the English, earlier today it took me three goes to get the spelling of "persuasive" correct enough for Chrome's spell-checker to understand what I was attempting.

Kanae Minato's Confessions has been a huge bestseller in its native country, the film adaptation was nominated for an Oscar in 2011, but I requested it basically because I really like Japan. Which was lucky because this book is amazing.

Middle school teacher Yuko Moriguchi's four-year-old daughter is dead, drowned in the school's swimming pool in what everybody believes was a tragic accident. Yuko knows better. She knows her daughter was murdered by two of the students in her class and so, on her final day as a teacher, she announces this fact to her students, tells them what really happened, and what she has done about it.

Confessions is what it says on the tin: the personal perspectives of this event and what follows. It begins with Yuko's lecture, written as it is spoken, then moves on to other stories told in different ways by various people involved in what happens. In lesser hands this could become dull or repetitive, but Minato's plotting is taut, her ideas horrific, and she performs the literary equivalent of a magician whipping a silken handkerchief to reveal his disappointingly un-dismembered assistant. And then she does it again. Then a couple more times with feeling. To the end, Minato is yanking back great swathes of fabric, forcing you to reassess and rethink what you've been told. It was only at the top of the final page that I understood what was going to happen by the bottom - and it is perfect.

The story feels a little odd at first. The writing - which has the flatness I typically expect from a Japanese translation - sits uneasily with the story conveyed. The juxtaposition of realism and an almost absurd level of dramatic reveal pushed my credibility, but what felt discordant became understandable with the perspectives of other narrators. Trust Minato the writer, but do not trust her characters. Confessions should be an object lesson for anybody hoping to pen a psychological thriller of their own.

I define a five star book as one which makes me want to run up to people in the street and make them read it. If I knew where you lived I'd be standing over you now. Confessions is dark, horrific, and immaculately done: you really want to read this one.

Confessions on Amazon UK
Posted by Dor at 09:10