No, please, I'd love to hear more about your childhood - The Penny Falls by Mark Bastable 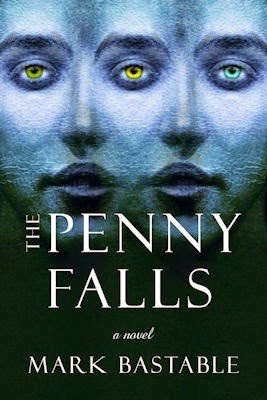 From the blurb and the opening sections of this book, I expected to read a horror novel - something along the lines of Stephen King's The Dark Half, perhaps. Instead, I got a book which could easily have been split in two and marginally re-skinned to give me a (slight) horror and a contemp/literary. It wasn't much of a problem for me because I read a fair amount of litfic but if you're after a story which sounds like the blurb, keep walking.

The narrative is split between four first person narrations, the brothers mentioned in the blurb plus Stephen, a literary agent who, having seen Pablo's blood soaked arrest on the news, convinces Pablo to write his autobiography. Initially the novel is taken up with Stephen's story and Pablo's manuscript. Luckily, Pablo decides part way through his manuscript writing he's not going to continue unless he gets to find out about Stephen's life, so we are gradually given that account. It's not badly done, it's interesting enough, and it's let down mostly because it's attached to this horror novel it doesn't really have anything to do with. It could stand alone quite easily and would probably be better for it.

The story of Tom, blood-soaked Pablo, and their invisible triplet feels as though it takes a back seat to Stephen for much of the book, largely because their story unfolds through Pablo's manuscript which begins with his childhood. It's an awfully long time before we get back to the present situation. Again, the story of Pablo's life is not an uninteresting one and it's told well (rather *too* well for somebody with Pablo's level of education), but I came here to read a book about twins who have a triplet trying to take over one of their bodies, not Harry Potter and the Half Blood Prince's endless "Well, I'd love to tell you what's going on Harry, but first you must sit through a couple of hundred pages of something else".

There is plenty of good about this book: nice ideas (I loved the idea of Tom being born first but being the younger twin); it's well written; Tom's character is well done.

However, there are also issues. First, the narration: I did not find the four first person narrators distinct enough to tell them apart initially and it took me far too long to cop onto the fact they are paired throughout. I will emphasise this may well just be a problem for me.

Second: the suspension of disbelief. Rather too often the the story seemed to rely on things which didn't make enough logical sense - when we first meet Tom he's seeking help for his phobia of flying, but instead of going to a psychologist to help him with that, he's seeing somebody who wants to talk to him about his childhood. Good for the reader because it means we get Tom's story (because there simply aren't enough accounts of people's childhood in this book already), but I'm rather surprised he wasn't, yannow, pursuing a cure for his phobia. There is that part about Stephen convincing Pablo to write his memoir which is as weak in the book as my glib account above. That thing about the twins being born either side of the dateline: cool idea, but problematic (because you're not good to go as soon as you've popped the sprog out). Then there are a hundred other medical questions to do with Pablo as a newborn - these little things really undermined the book for me.

Third: the ending. It really, *really* fizzles out. I was down to the last couple of percent and wondering if it was going to end on a cliffhanger because there was no real drive towards anything, no problems to overcome, no consequences if they failed. The ending is so poor, I'm tempted to make this a 2 star, but as it really is only the last 2 percent which is bad, it can keep the 3 stars it managed for the majority of the book. 2 and 1/2 stars really.

So: medium. It was okay. It's been well published - I've read worse from trade publishers. It's well written. The main complaint is that it's nothing like the blurb. Even judging it for what it is (because blurbs can be changed), it's only okay. It's too much a horror to give to a litfic reader (the attitude to women is right for the character, but it's not what I want to read in my litfic), it's too slow and litfic-y for a horror reader. As a reader of both, I simply felt it did neither thoroughly enough to be compelling.