If I wanted to spend time with a man like this, I could just leave my house - The Revised Fundamentals of Caregiving by Jonathan Evison 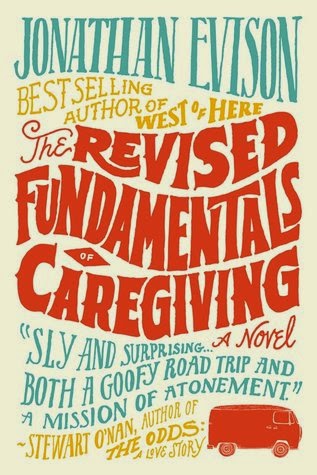 [A Note: I'm going to give you a SPOILER ALERT because at times this review refers to things which happen quite far along in the book, but any actual spoilers and specifics have been put in highlightable textblocks].

I have a particular pet hate about books: I really hate misleading blurbs.

I hate blurbs which tell you what happens in the book more than 15-20% of the way through.

The blurb for The Revised Fundamentals of Caregiving tells us that Benjamin Benjamin and his charge Trevor, a 19 year-old with MD, travel across America to see Trev's dad.

Happily, the preceding hundred or so pages are spent showing us what kind of person our narrator is while very, very slowly trying to build up tension about the exact circumstances in which his kids died. Unfortunately, he's a casual misogynist who needs to spend some time googling Schroedinger's Rapist. If it made a difference to the story in some way, great, no problem, but I didn't feel it did. If it had felt deliberate, again, great, no problem, but this didn't.

At one point I was ready to put it down unfinished: Ben stalks a woman he went on a date with (he was supposed to go out and get laid - the assumption is she's fine with that) to her place of work and then mentally calls her a bitch because she - having previously signalled her disinterest in him - arranges for a colleague to serve him.

But, people like this exist. Lots of them. And having one exist in fiction is not a bad thing any more than having serial killers and paedophiles is, it's just not what I want to read. The bad thing was that after those first hundred pages *poof*, he's no longer like that. And maybe you could argue this was his character arc, that he was redeemed by the decision to take Trev to visit his dad and by the hours spent in a car with the Spiritually Noble White Trash Girl - (c)The Ghost Of Charles Dickens - but actually what happens is that they spend some time in a car together and he isn't the jerk he previously was. Maybe she farts sedatives.


Once the lads do set off - well, it's weak. It feels far too much like it's actively trying to emulate Little Miss Sunshine. A jazz hands of "kooky" characters is assembled in a very obvious type of way and Trev and Ben pretty much stop being the people they were before and become cliché (Trev) and whatever the narrative needs him to be (Ben). Throughout the book Ben's character lacked fidelity for me in lots of tiny ways - I have trouble with the idea that a stay-at-home dad (to a son and a daughter), is unable to see women as people unless the narrative requires him to. It could have been a good point of conflict and tension for him, but it lacks that self-awareness to kick it up a notch leaving me to back away slowly rather than take an interest.

The writing is fine for the most part, although at one point I assumed Ben was having a stroke because a particular description was given twice in close proximity and I took it literally.

As a pedant, I didn't feel the logistics of situation were thought through so Trev's MD felt like a device to get the pieces assembled:

When Ben is arrested, no mention is made of what is going to happen to Trev, or who is going to look after him. No provision was made for the time Ben was in the cell.


Another example of the this meatworld logicfail: Trev plays Xbox games but he doesn't appear to have PC internet access. For somebody with motor difficulties, a voice operated PC would be an obvious tool to have.

And then there is the great emotional payoff that isn't: what exactly happened the day Ben's kids died. It doesn't work: it's not a shock because it's pretty much gone into earlier in the book - I was expecting something new, or some detail, something which would make me view it, and Ben, differently. Instead of being emotional, or going "Ah, now I get it", I was just thinking it's a good job the sprogs did cark it because otherwise this whole book wouldn't have happened. Also, more pedantry to do with the specifics of the situation.

If it hadn't lost me so early, or if Ben had continued to be a misogynistic arsehole throughout the book rather than just the first hundred pages, maybe I would have liked it more. As it is, there's nothing much here to recommend it and it's fairly irritating, especially the whole "lads saved by women" trope.

I'm going to give it two stars and make sure you know it's nothing like Little Miss Sunshine. People who don't see what's wrong with the stalking bit can give it 3. I'm not averse to reading something else from this author, but it would depend on the blurb.