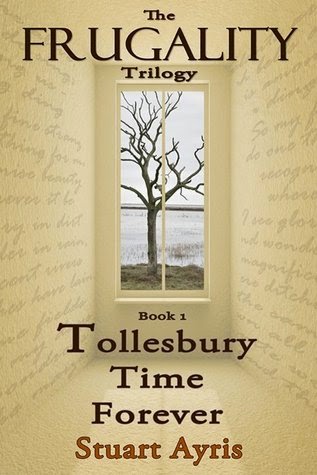 In Tollesbury, psychiatric nurse "Stuart Ayris" accompanies the police to the home of one of his patients who has not been seen for over two weeks. Inside, they find no trace of Simon Anthony, only words crawling across the walls, the words you, oh reader, are about to sit through.

For the most part, this is not a terrible book, it's more... not very good, and that's a shame because Stuart Ayris is clearly a man who can write. The problems I feel there are with the writing could be overlooked but unfortunately there is no story here and the ideas are neither profound, original, nor expressed well enough to make the trudge through the text worth it. The last 30% is actively terrible. It was always going to struggle with the banal path it gave its protagonist, but I found it shallow to the point of offensive in the way it offloads the conflicts. The female character of the second half is particularly poorly drawn and I was given no sense she's lived the life the book tells us she has.

From the beginning, the structure didn't work for me. It's a nice idea, a "found document" text, and something of which I am particularly fond - except, if it's going to be a found document text, then it has to read like one. There needs to be a narrator who has written this and a present for them doing that. If they are writing it from a position of knowing the whole story, that is likely to be reflected in the text. It isn't. There is also the matter of the transcription; "Stuart Ayris", rather surprisingly, has nothing to say about some of the content.

The narrative is further weakened by being written more as a standard 1st person past tense. The prose is overly descriptive with Simon persistently giving descriptions of places he should - as a character - already familiar with, eg "The trees that lined the track upon which I walked gave way to a neat field on the left but held up on the right.". There are moments when the language becomes disjointed, reflecting the narrator's state of mind - except it isn't the state of mind because this is being written up afterwards. I don't want to go into it too much because of spoilers, but little or no consideration has been given to the Simon who is writing this story on the walls.

Then there is the language. I'm not a fan of the self-concious olde worlde syntax especially in this found document context (if you're writing on the wall, surely more likely to use abbreviations). It's also repetitive. The sky is always the firmament, every time Simon reacts to something we get to find out he breathes, holes in doorways are always apertures, "literally" - also once misused. Many times it feels like the author is just not paying enough attention to what he's written: we are told Simon's clothes don't look out of place in 1836 - yet he's wearing jeans. There is one moment where we are told what another character thought. The less said about the phrase "pulsating penumbra" the better.

Then there are the similes, not all of which work and not all of which hold up to applied logic: "the torch beams picked out [the words] as if they were groups of well-ordered flies" - which is a nice image until you wonder why nobody had bothered to try the light switch, or why they were there late enough to need torches. I'm also the kind of person who works out how much wallspace you need for 100K words (writing floor to ceiling, about 25ft) - I didn't get the sense the author did.

At times the book is trying far too desperately to be profound. Unfortunately the fail state of profound is #pippatips: "When the only way a man can deal with another man is to kill him, then that man will be a friend to no-one for as long as he lives [...]"

Then - the poetry. It's not good. There are exclamation marks, and it's been made to rhyme. And one of those rhymes is "ring a ding ding!". Again, it's pushing to these big ideas but there is not enough substance in them and there's no awareness there.

Although it is very well written (and published) for a self-pubbed work - there are some errors, mainly in punctuation and I'm not sure you can imbibe a view - but it isn't, in my opinion, good enough to be published. While perfectly readable if not very good for the first 70%, it is totally derailed by the rest. It's a shame because, as I began by saying, Stuart Ayris can write, but he would also benefit from a ruthless Beta or two. Pass on this one, but I'll have my fingers crossed for something better from Mr Ayris in the future.

One last thing - I'm unamused by the copyright violations. It is right and fair that people are paid for their work; plus quoting "I am the Walrus" tends to make it look as though ones grammar has gone totally awry.