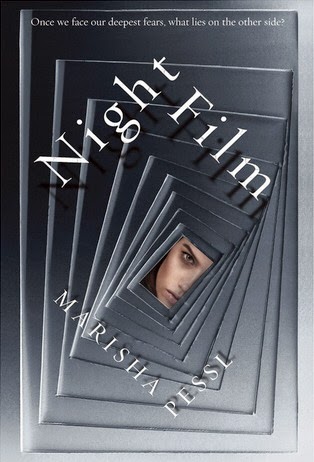 At any given time I have 86 bajillion things to do, which means much of what I'm trying to do gets shunted to one side while I deal with those things actively on fire.

I meant to write a review of Night Film when I read it but time and Chrismas have conspired to push it onto my "No, I'll definitely do it *this* week" list - that is, the tasks which are penciled in for April. So it is this review has ended up not being written until now, when I'm merely supposed to be making doctors appointments and cleaning the oven as opposed to anything of vital importance.

Because of this, it's going to be slightly vague and I can't double check things because the book has gone back to the library, but I do have things to say, hence the review.

Those things are, basically, that Night Film wants to be a spooky, psychological thriller, but spooky psychological thrillers only work if the reader is carried with them. Night Film trips itself up, badly, and beneath the effort and the "scan these things with your phone and you can watch a video on the interwebs!" is a book which doesn't manage to be much more than "fine".

I found the characters weakly done. Nora, who helps Scott investigate due to totally legitimate reasons which would absolutely happen in real life, is particularly desperate. Ashley, whose suicide protagonist Scott is trying to investigate, is irritating despite spending all but the prologue being dead. Every single sodding person the investigation leads them to (and there are quite a number) goes on and ON about how amazing she was, and how she had this way of LOOKING at you. It almost got away with it, prompting sarcastic asides rather than a fully blown book fling, but set in the context of the resolved story it's an especially low point.

Initially I thought Night Film was going to be like the readable bits in House of Leaves (I'm dyslexic. Me and the footnote have a tortured history), and I would have settled for something reasonably intelligent, but it's neither of those things.

There are some good parts - a sequence towards the end of the book is particularly good and exactly the kind of thing I wanted to see from the rest of it - but they are rather derivative if you know your directors.

It's readable enough and because I like that it's trying to do something even though it fails, I'm going to give it three stars.