Self-indulgent - How Should a Person Be by Sheila Heti 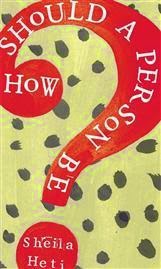 I've never seen Girls, that TV show everybody seems terribly keen on, but from time to time I read articles criticising it for being about Privileged White Girls. How Should A Person Be? by Sheila Heti made me think of every criticism I've ever read levelled at that TV show which I haven't seen.

I didn't like it. I didn't find it funny. It wasn't just that it had nothing to say to me - which it didn't, but that hasn't always mattered in the past with other books - but what it did say seemed so self-involved. Self-involvement is not an inherently bad thing, but this one just didn't do it for me at all. It's not even a case of disliking the "main character", it's more that I'm busy and I don't have much time for this "Will I matter?", "I want to be important!" navel-gazing, particularly when it's pretty much non-fiction.

Maybe it's a cultural thing. Maybe this just doesn't translate well to a Brit. Maybe, as a creator of art, I have limited patience for people worrying about creating art (because you do it or you don't do it and believe me that you are the only person who cares either way). Maybe it's because people who want to be artists (rather than people who want to make art) make me gripe.

Or maybe, as somebody who considers it a life well lived if you make it to the end with most of the limbs you started out with, I was never going to care about a book wholly concerned with creating problems for oneself.

Email ThisBlogThis!Share to TwitterShare to FacebookShare to Pinterest
Labels: How Should A Person Be?, Is The Answer "Not A Jerk"?, library books, One Star, review, Sheila Heti