I wasn't expecting to like this, but I did - Pantomime by Laura Lam 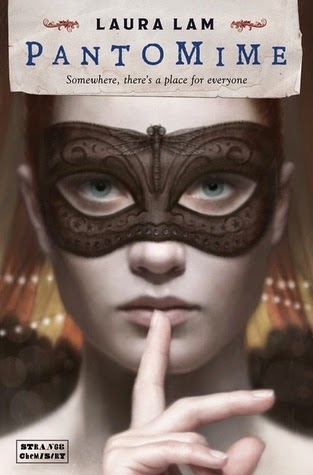 I'm not entirely sure why I'm now pretending I write reviews because I don't write reviews; I prefer to just complain at length about the bits which disappointed me. However, me giving out about Pantomime would be like taking Jonathan Franzen to to task for the epic lack of velociraptors in Freedom. At least, I assume there aren't any velociraptors in Freedom; I only got to page 8 or so before I realised I wasn't going to get through another 604 pages. That's probably a little unkind, but as Mr Franzen is famous for regarding the internet as a blight upon humanity (that and writing books which don't have any velociraptors in them), I think I'll get away with it. If I don't, congratulations Jon! You were right about this place or all along. You're welcome. And don't worry about it, I may not even have been reading Freedom, I may have been reading The Corrections. Whichever one *doesn't* have the velociraptors in it, that's what I read 8 pages of. Try and hook me earlier next time.

I'm not Pantomime's audience. I'm in my thirties. That's so old, the closest things we had to YA as teenagers were Sweet Valley High and the Point Horror books. So, I expected to read a book which was slightly annoying because all YA is to some degree. If it wasn't annoying, it wouldn't be about an authentic 16-18 year-old. Yes, this is my backhanded compliment, YA fans. I wanted to read Pantomime though because Laura is a vague internet friend via AbsoluteWrite (and if she's reading this and wondering which one I am over there: naff off Lam, reviews are not for authors), but also because the main character is intersex.

Raised as a girl, Iphigenia Laurus joins the circus as the male Micah Gray. The narrative is split between Summer (as Micah at the circus) and Spring (as Iphigenia, struggling with being a noble's daughter). Not a great deal happens, but the tension in Iphigenia's sections as she prepares for her Débutante ball is well done, and Micah's parts are studded with the colour of the circus. I'd have criticisms of the language and the lightness (and convenience) with which some of the more logistical aspects are dealt with, but I feel they are down to the genre rather than the writing. I really liked how Micah's gender impacts the obligatory YA love triangle. My biggest criticism is for the plot which I felt lacked any real direction or urgency until the last 20% or so when the pace really picked up.

It's an interesting book, but it reads more like a prequel than the first of a series, especially as it's not as standalone as something like The Hunger Games is. Book 2 - Shadowplay - was out in January.

I am also incredibly frustrated with that blurb. It has virtually nothing to do with the plot and has very little to do with the book. Imagine the back cover of Harry Potter failing to mention [SPOILER ALERT] Harry is a wizard. That's how annoying this book's blurb is. Add to the fact it's a pretty unique topic and I do start wondering if somebody somewhere thought it would be off-putting. Maybe it will be for some because it's new and different, but I identified a heck of a lot more with Gene than I do with most female characters. I may be possessed of 100% ladybits, but I often feel I am failing at being a girl.


I'm giving this one three stars (with a mental 3.5 stars for that last 20%). It says a lot about that last 20% that I would have gone to check out the sequel straight away if it was already out. There aren't any velociraptors though, dammit.