Thought I'd like this, did - Shadowplay by Laura Lam 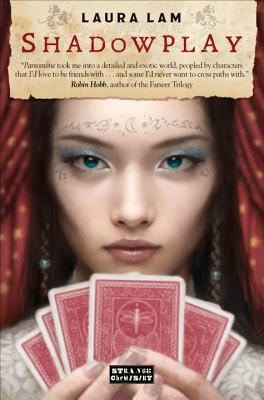 NB Shadowplay is the sequel to Pantomime, so this review contains spoilers for that book; I'll put a page break on this review to keep you safe. You can find my review of Pantomime here. It is possible to read Shadowplay without having read Pantomime as the key information about events is reviewed as it is touched upon, but - even though this is better - I would recommend reading Pantomime first.

Also, this book was provided to me for no monies by the kind peoples at Angry Robot/Strange Chemistry, facilitated in this act of goodness/marketing by the mighty NetGalley.

The short non-spoilery version of this review: Yeah. It was pretty good. If your tastes run to YA (which mine don't), make this 4 stars.

As I said in my review of Pantomime, Jonathan Franzen needs more velociraptors in his books if he wants me to read them. I also mentioned something about not being the target audience for YA and due to that, was not going to complain (for once) about things I dislike but which are fine within, or expected of, the genre. The same holds true for Shadowplay: I may personally find it lacks *adjective*, but I'd say that about Harry Potter, or The Hunger Games. I'm 32. I have a limited capacity for showing enthusiasm for most YA stories. By the end of The Hunger Games I was mostly annoyed at how ineffectively the government was run. If I was in charge of a dystopian regime whose existence was threatened by a teenager who had become a symbol of hope for the oppressed masses, I'd arrange for her to choke to death on caviare during a secret tête a tête with a very rich government minister. This is why you must all do your utmost to stop me seizing power after the revolution happens.

So why am I reading Shadowplay then? Because the last 20% of Pantomime made me want to, and I originally picked up Pantomime because it was 99p. Also because I was interested in reading a book with an intersex main character, because I vaguely know Laura through AbsoluteWrite, and because her agent has had a full MS from me before now and I intend to statistically analyse everything she reps in order to create the irresistible project for next time. It's going to involve miniature crime-solving circus hamsters who moonlight as postmen and enjoy yoghurt.

Shadowplay picks up directly from Pantomime's cliffhanger which saw Micah and Drystan studiously doing their utmost to avoid the various people keen to track them down for reasons to do with murdering, blinding, arson, thievery, and refusing to have your gentleman's bits sliced off. They seek refuge with an old friend of Drystan's, the magician Jasper Maske, then stay with him to learn the trade he no longer practices. They are joined at Maske's by the young lady on the book's rather gorgeous cover, Cyan, and the three are dragged into a duel with Maske's rival which, as the blurb rather portentously puts it, will decide their fates.

In structure then, some similarities to its predecessor: Pantomime was concerned with Micah learning to perform in the circus, Shadowplay is concerned with him learning to perform magic tricks. Where Pantomime was slowed somewhat by the division of the narrative between Micah at the circus and the story of how he came to run away from his life as noble's daughter Iphigenia Laurus, Shadowplay keeps its storylines more closely intertwined and, as a result, stuff actually happens. Which is good.
For me, the stronger of the two storylines is the one the blurb doesn't go into. For that reason I won't either except to say it concerns Micah and the unusual talents he displayed in Pantomime, and it is *very* engaging. The duel and the various parts to do with it didn't work for me for several reasons - a magicians' duel is not a new idea and this one doesn't bring much to the party beyond the specifics of the book's world. I also felt the stakes to be weak, that failure would be a hassle rather than a disaster, but then that says much for the characters Lam has created: I really felt like they'd cope.

I have praise for Lam's character development - where Pantomime's Micah was terrified of anybody finding out what he was, and spent a little too long for my taste internally proclaiming he was a freak, Shadowplay's Micah has begun to accept what he is, even though he doesn't know what that is. At times I found the emotion a tad thin, particularly at the grief-sozzled beginning, but the interactions between the various characters develop naturally, Micah's concerns about those new to him feeling authentic rather than throwaway. Kudos, also, for Lam's ability to do what eludes so many aspiring (and a decent smattering of bestselling) writers: writing the character rather than the gender.

I also really liked the world building. Shadowplay gives us more of the land of Ellada and the socio-political forces beginning to make themselves felt. There are beginnings here, stories which will hopefully come to the fore later in the series and I'm looking forward it. Lam inspires confidence that she knows what she's doing and where she's taking this. I may not have liked the book's story - which was also true of Pantomime - but the larger series story is epic, and detailed, and the ending - which again, is also true of Pantomime - has a bit of a "Gah! Why did you have to drop that in and stop there?!" about it...

...which is only good while you're reading it. Neither Shadowplay nor Pantomime are standalone novels - both end on cliffhangers - and both left me feeling unfulfilled. There was no feeling of triumph, or disappointment, or comprehension, or any of the other things I feel when finishing a book. Instead I'm left in a state of mild irritation. Once the series is complete, or at least more established, this will probably feel like a strength. Right now it doesn't.

Shadowplay builds on the good foundation Pantomime gave it, developing the ideas and beginning to give this series more of a stand-out identity. While on the surface some of these ideas - like the magician's duel - are rather too similar to something I've seen/heard/read/played before, the book never feels derivative. For somebody who isn't a 32 year-old repository for useless facts, the target audience for instance, it's unlikely to be a issue. My biggest gripe about its predecessor remains: the reluctance of the blurb to mention the fact Micah is intersex. It annoys me because it's so central to the story.

There are vivid ideas, a well realised world, interesting characters, and a story I definitely want to find out what happens next in. That said, it wasn't quite there for me, just as a personal taste thing, so I'm giving it 3.5 stars but it was very, *very* close to 4. If YA is more your thing than mine, I'd definitely suggest giving the series a whirl.