If You're Going to make a comparison to Downton, actually *watch* it first - Habits of the House by Fay Weldon 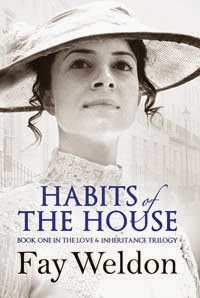 You know when you get a book and because it's by somebody whose work you like, or somebody who's written many, many books, you trust it's going to get better?

Meet Habits of The House. It's not entirely its fault; it's been given a stupid cover (
I'm not sure who that girlie is supposed to be), and it's being pitched to Downton fans despite the fact it's a comedy of manners.

However, everything else is its fault.

The storyline is to do with the son of the family trying to marry an American heiress because the family have significant money troubles.

In the end (highlight to read the spoilers):

The Earl wins a cumulative bet on the races which solves all the money problems, *and* the son marries the heiress, *and* the wife of the Jewish financier gets to meet the Prince of Wales.

I suspect it's supposed to be a punchline, but it just left me wondering what the point of reading the sodding book was.


I like Fay Weldon's style of writing, so I'm giving it 2 stars, but everybody else should probably give it a miss.