Doesn't Quite Do Enough - Call The Vet by Anna Birch 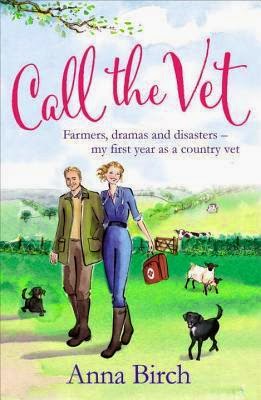 [Thanks must first and foremost go to the kind people at Random House/Ebury for providing me with an ARC - it cost me no monies, but I'm going to complain anyway.]

When I was 9, we took The Cat of the time to see our local vet, Mr Gilbert. Unlike these modern times full of trendy young things with whom I am on first name bases, Mr Gilbert could only ever be known as Mister Gilbert. I don't know how old he was exactly, but it was probably at least 192 because after he'd finished sticking pointy things into The Cat, he suggested I - who had been stroking her head and reassuring her in the manner of a 9-year-old who recognises this creature is the closest she's going to get to a pony - would make an excellent veterinary nurse. Hopefully he died soon afterwards and was spared the influx of wimmins into his profession, wimmins who were actual vets with actual qualifications and the actual ability to get really intimate with a cow.

Interestingly, a few years earlier than that, Anna Birch was told by her school that she wouldn't be be study the sciences because, as an all girl school, they didn't offer them. Happily, some years later, encouraged by her then boyfriend, Birch attended vet school as a mature student, qualified, and landed her first job in a small town in Dorset near the coastal town of Bridport. Bridport is where Hugh Fearnley-Whittingstall hangs out. I've never been, but I'm convinced they eat cous cous there.

Initially, I didn't think much of Call The Vet. I was inevitably going to make comparisons with the master, James Herriot - indeed, the book does itself - and the first chapter felt tremendously derivative. I'm not a vet and have no first hand experience of the correct response to a cow with a prolapsed uterus (although I can tell you what mine would be) but it all feels very familiar: large organ to be fed through a small hole, doubt, fear, even the trick with the wine bottle *crosses legs*.

Overall, it's not quite there. It doesn't do any of the things I'd hoped for with enough aplomb. It's not funny enough - although there's material, it's only written with an adequate comic hand. It's not interesting enough - while I did learn something, my impression is of more time spent on Birch's dog and her own feelings of inadequacy. It lack cohesion - the introductory language to Birch's colleagues is used two chapters in a row; the "it wasn't like this for James Herriot" sentiment is used more than once. Frustratingly, there are the glimmers of something more - following a disastrous/cringingly funny moment with an under-anaesthetised dog (which is criminally underwritten), Birch is told by the office colleague she roped in as assistant "I was scared and you were stupid", but this never extends into self-awareness. The "characters" left little impression on me.

While there are certainly worse ways to spend an afternoon than lying in a postdrome stupor reading this book while Wren licks your feet, I'm not really seeing anything here to recommend it particularly. If you want a "my first year as a vet" book, this is just about "fine".

Email ThisBlogThis!Share to TwitterShare to FacebookShare to Pinterest
Labels: Anna Birch, Call The Vet, It Wants To Be James Herriot, Memoir, Non-Fiction, Not Funny But Technically Humour, Read 2014, review, Two and a Half Stars, Vetinarianism