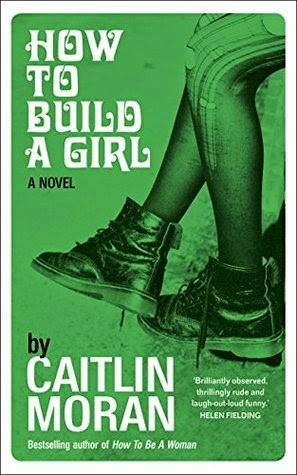 [My copy of this book was an uncorrected proof, provided to me gratis by the publisher, HarperColins, facilitated in this act of goodness by Edelweiss. I think this makes me a pawn of Murdoch now.]

From the outside, Caitlin Moran can look a bit like a one-trick pony. Although she's been a journalist and Times columnist for many years, she had massive success a couple of years ago with her memoir/feminist treatise How To Be A Woman which contained many amusing tales about her poor Wolverhampton childhood. She, with her sister, has written a sitcom, Raised By Wolves, about a teenager growing up in poor Wolverhampton. Now there's this.

Despite the authorial introduction in which we are assured How To Build A Girl is not based on truth, one could be forgiven for fearing, as I did, a thinly fictionalised re-tread of the stuff which made Moran a household name. It isn't. Far from it. Although there are clear parallels - and some commercially cynical titling and structure going on - it all read new to me.

Opening in 1990, 14-year-old Johanna Morrigan lives in Wolverhampton. She wonders when she's going to get to finally have sex. She spends much time wanking. The book is hilariously instructional on this point if initially a little ... uncomfortable. The opening scene is of Johanna doing what she enjoys while her 6-year-old brother is asleep next to her. That it manages to get away with this is entirely due to Moran's cheerfully honest narrator, and later, to the other characters.

The book follows Johanna from awkward 14-year-old to 16-year-old music reviewer "Dolly Wilde" to vaguely "built" girl of 18. It is that rare thing, a female narrative untempered by usual sub-plots which so often tacitly reinforce the idea that to be female is not enough on its own. The prose even points it out: there is very little female narrative of what it's like to fuck and be fucked. This is a coming-of-age story. It is about Johanna figuring out who she is. It's not about the mistakes she makes while she does it, and it's not about them *being* mistakes, and it doesn't shame her for anything she does. It just ... is.

Johanna is going to make or break this novel for the reader: she's frank and honest, she doesn't know what she's doing and she's not what she wants to be but she's going to try. She is all feigned confidence and internal doubt, but ultimately just a person who is doing what people do, in a top hat. I loved her utterly and not just for the word "swashfuckler".

There is a section near the end about cynicism, about what it does, and it brought me to tears (and I am not generally a weeper) because it's so utterly true and it made me swear to be a better person for the rest of my days. In an earlier draft of this review, I went on to say the feeling wore off after an hour or two, thank god, but I've read the bit I'm talking about several times and it made me weep again. I'm weeping now. I went away, ate muesli, came back and started up again within seconds.

[...] it is a million times easier to be cynical and wield a sword, than it is to be open-hearted and stand there, holding a balloon and a birthday cake, with the infinite potential to look foolish.


I don't have it in me to stand with balloons. Sometimes I try; invariably nothing happens but it's that nothing which destroys me. I once killed every conversation on a table of 12 people by being enthusiastic about Marina Lewycka's A Short History Of Tractors In The Ukraine, so I went back to what I learned to do at school: not show enthusiasm about things. I play down my love of everything, or I turn it into joke: the crazy cat lady, the foreigner, the girl who waits for somebody else to do maths. I play down the things I am good at because it's easy to deal with that nothing if nothing is what I've given. But I want balloons. I want to have balloons and be proud of them and when that nothing happens, I want it to not matter because balloons.

And this is why I love this book and why you need to read it. Moran's finger is so on the money in so many respects. I don't think there's a person alive who doesn't feel like a fraud at some point, and How To Build A Girl is about a character who is pushing against that as she tries to ... build who she is. Good books are about tension and this one considers the place where enthusiasm and ego meet. It is brilliant, and hilarious, and at times like reading something you knew but have forgotten; we've all been there.

It misses out on 5 stars very narrowly - it lacks an overall cohesion. With something like Catcher In The Rye, there is a reason for the particular section of story we are told - HTBAG, while thoroughly entertaining lacks that and, as a consequence, sputters to an ending rather than giving that satisfying over-ness. There are some other minor nitpicks, a couple of things which - again - lack that wholeness and which dangle annoyingly. My uncorrected proof had some modern slang terms in it which I hope were removed.

It's also worth briefly touching upon the Twitterstorm of #CaitlinMoranShouldRead. That was a nonsense; this is not YA. This is coming-of-age. It's looking back from the vantage point of adulthood. It has far more in common with Moran's invoked Jilly Cooper than any YA I've ever read (but I'm not a big YA reader). By all means give it to your 14-year-old, but the prime audience are more likely to be me: 30-somethings who know who The Smashing Pumpkins are.

How To Build a Girl is a first-rate read which I thoroughly recommend - it's sweary and graphic and surprisingly educational. Even before the bits which had me weeping over my Kindle it was pretty fabulous, and those bits by no means made the book for me. If we're going to complain about Moran's equine fidelity, we can make sure to note she perfecting it with every offering: 4.5 stars.

Email ThisBlogThis!Share to TwitterShare to FacebookShare to Pinterest
Labels: Amazon Owns my Soul, ARC, Caitlin Moran, Coming of Age, Edelweiss, Four and a Half Stars, How To Build A Girl, Humour, It's So Funny I Nearly Choked, Literally Coming of Age, Read 2014, review