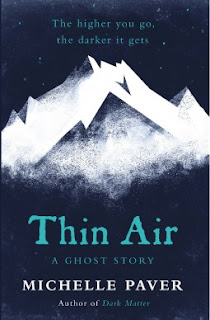 1935. There’s a mountain. It shall be climbed. For God and Empire, five plucky Englishmen will undertake to be the first heroic men to reach the top of the mountain which has claimed, oh gosh, many lives. They, alone, with all of their porters, will climb the mountain. They will be heroes.

It probably didn’t help that I’ve not long since read Sarah Lotz’s The White Road, also a ghost story about a mountain climbing expedition (in that instance, Everest to Thin Air’s Kangchenjunga) and really loved it. I found it difficult not to compare the two books, especially as they cover much of the same ground and same ideas - as one would understandably expect for ghost stories about mountain climbing. Thin Air definitely came out wanting.

It takes a while to get going. Our narrator is Dr Stephen Pearce, younger brother (and very much the spare) to Kits, the driving force behind the expedition. As children, the brothers were obsessed with Bloody But Unbowed, Edmund Lyell’s account of his heroic failure to climb the mountain. Now they’re ready to succeed, hopefully with a lower body count than the Lyall expedition managed.

Their expedition begins by calling in at the home of Charles Tennant, one of the survivors of the aforementioned expedition. Tennant has never spoken about what happened on the mountain and isn’t keen to now. Especially not to Stephen, who stumbles in on his private rooms to be given hints Lyell left much out of his account and that Tennant is terrified of the great hunk of rock he’s chosen to live out his life in the shadow of. Dun dun DUUUUUN.

From there, we have the long trek to the base of the mountain. It serves to introduce our team, their dynamics, and the scale of the challenge ahead. There’s some attempts at foreshadowing the spooky stuff to come, but even when that does arrive spooky it is not.

Paver makes a stab at a 30’s setting. I was glad to see her include a degree of casual racism (because I think it’s important not to act like we white people weren’t all arseholes back then and still have much to learn today) but at the same time there felt to be a certain degree of pulling back - an effort to acknowledge without being too offensive.

It’s a short book and shorter on period context. Although the style tends towards that of a Boys Own adventure, these characters didn’t strike me as existing in a 30’s way beyond their discussion that it’s unsporting to use oxygen cylinders to get the the peak and looking down on people for being German (although - would they?). The plucky middle-class voice of the narrator isn’t great and seriously weakens the descriptions of the “spooky” goings on.

There are also some odd mistakes which really should have been picked up by the editor, such as a reference to their base serving as GCHQ which is off because 1) it wasn’t called GCHQ until after WW2, and b) there’s not much encryption and intelligence gathering done at base camp.

Finally, the grand “why” lacked any real horror. Again, it came down to the style of the writing for me - what should have been this grotesque reveal was just… meh. I didn’t feel much was done with it once it was revealed. It didn’t change anything.

I’ve tried to put my finger on why this didn’t work for me without spoilers or without going down the road of “the book should have been written this way”. I think it’s because I never felt as though there was an antagonist. In a ghost story, the antagonist can often be a setting: the haunted house which is trying to get the occupiers to leave or whatever, but Paver doesn’t do this. The fearsome mountain never feels like it’s anything but a mountain they’re climbing, for all that initial buildup. Pearce never feels as though he is being targeted. I didn’t feel there was anything deliberately working against them, which is vital for pretty much any story. Without an antagonist, there’s just a bunch of lads doing stuff.

I didn’t care for Thin Air. The writing was clunky, the story was pretty dull, and - having recently read another mountain climbing story - there wasn’t enough of other stuff to interest me. Read The White Road by Sarah Lotz instead.