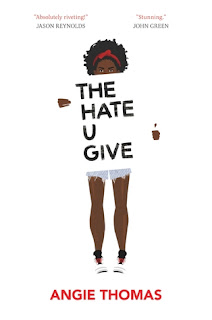 This book is great and you should read it.

Except maybe if you really hate YA, because this is certainly a YA book.

That said, Thomas is a clever writer who neatly cuts through the usual “YA protag is the center of the universe” with a single line of dialogue from her mother.

I felt conscious while reading it that YA success lies in appealing to white 30-something women like me, who - incidentally - watched the Fresh Prince and sang along to 90s music first time around, and it felt a little hamstrung as a result.

Even so, this book will hopefully be the gateway drug for those who weren’t yet ready for the truths of Dr Maya Angelou et al. Like I wasn’t the first time I read them. THUG has made me want to read something which wasn’t written for me.

It’s not racist towards white people.

No, really, that’s not a thing.

When Starr tells her boyfriend he can’t understand because he’s white, that’s not racism towards white people, that’s a 16 year-old not having the language to articulate in a moment of emotion that if you have not lived an experience, you are unlikely to have a full appreciation of what it means for the people who do. This is true.

The white-people/black-people conversation feels a bit shoehorned in.

I felt like Thomas missed a trick. The racism Starr is subjected to has given her blinkers about the ways other races navigate the white world. This doesn’t change and there feels a very obvious moment when it could.

Email ThisBlogThis!Share to TwitterShare to FacebookShare to Pinterest
Labels: Angie Thomas, Black Lives Matter, Read 2019, Read this. Read This Now, review, The Hate You Give