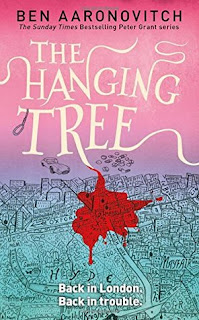 I had been looking forwards to this book for a long time, with some reservations. Forward because Tyburn, London, and some actual movements towards resolution of the larger story arc. Reservations, because there's rarely a good reason for publication dates to shift, then shift again, then again.

This time we're back in London and The Lady Tyburn is ready to call that favour she's owed. A teenager is dead following a party in a pricey piece of London estate and Lady Ty's daughter was there at the time. It would be very nice if this whole thing could be made to go away, by, say, Peter Grant, but there's more to this than a poor choice in recreational activity, and it has the feeling of a razor against leather...

The Hanging Tree continues the distressing trend of Ben Aaronovitch's books: they're great, you read furiously and then - alas. The ending. This review is being written off the back of the pre-Lies Sleeping re-read and the ending is even weaker the second time around. There's great drama, a race to get there before <something> happens, and then! Turns out that's not a problem because of Weak And Curiously Convenient Reason; let normal Grant'n'Nightingale vs The Faceless Man service commence.

And that weak plotting is not restricted to the end. The very fact that Peter is called in to help smooth things over for Lady Ty's daughter is a pretty odd move for a lady who is very good at getting things done and likely has many better favours she can call in. It feels like a lazy move to get Peter to the right place to discover, gasp, that there are Falcon elements to this after all. To bring up more examples would be spoilers. Is Deus ex Fabula a thing? Because it is all over this book like a rash.

However, I'm still a sucker for these books. The writing has this great conversational style which I love, they're witty, they make a better stab at diversity than the usual White Male author bothers to.

As ever, nobody who starts at the wrong end of this series is going to be convinced, but I do enjoy them far more than my star ratings suggest I do.