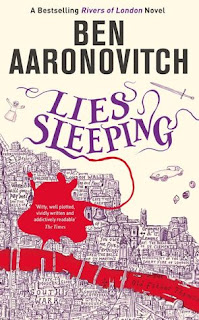 So we finally know who The Faceless Man is! Harumble!

It doesn’t make much difference! Hurumble…?

Okay, from here there will be spoilers for the previous book in the series, The Hanging Tree, in which the identity of The Faceless Man is revealed and it will really wreck your enjoyment of that one if you know from the start who it is. SPOILERS FOR THE HANGING TREE from here on out.


Having found out who The Faceless Man is, the Met and the Folly are on a mission to arrest him. Yup, that’s all I’ve got. Nightingale et al hunt down Martin Chorley, the man who was introduced in the last book.

It’s largely a great read. I complain an awful lot about these books, but they are gripping, so gripping it’s only when I come to reflect and consider it that I think of all the things which annoy me more and more as the series goes on. I think it’s because I love these books that I complain about them so much - I want them all to be as good as the first.

So, in no particular order: the shear weight of references to the the plot lines of the graphic novels (which I can’t read because hooray for dyslexia). It made a nice change from how pneumatic Beverly is, at least.

In an early example, Guleed, a neat side character introduced in Whispers Underground, does a Jacki Chan move on a car while fighting a baddie. Hey, remember that Chinese Guy who, in a single line from a previous book, handed her a business card claiming to be a legendary swordsman? No? Well, turns out she’s been training with him and has learned mystical ninja moves and somebody clearly has hopes of that TV series coming to fruition with a large special effects budget. Surely thought, Guleed’s skills would follow to laws of Chekov’s gun. Ha. Of course not. We’re too busy making references to that other time Agent Reynolds worked with Peter and not explaining what happened to Varvara (who seems to have just disappeared in the last couple of books) for that.

It is tiresome, and yet, the references one would expect to find here are curiously absent.

The whole plot of the last book concerned the death of Martin Chorley’s daughter. He was so cross he magically glued a man’s face to a tree then attempted to murder Tyburn and her daughter. But it seems that big fight with Nightingale and Peter in One Hyde Park did the work you’d usually expect from years of therapy. Dude is so over that. And that book he was after, the one he spent The Hanging Tree trying to acquire and the reason the fight took place in One Hyde Park in the first place? Maybe it doesn’t spark joy any more. As for Tyburn, well, she already blew up a water main on the guy, so IDK maybe she feels bad.

When one of the standout moments of this series has been the expression of Peter’s anger and desperation in Foxglove Summer - to understand Lesley’s betrayal, to reconcile his own childhood - it’s really disappointing. As is Lesley herself.

This is the big showdown novel. At the end of the last book we were treated to the realisation that The Faceless Man has some kind of need for Lesley due to her connection with Mr Punch, the spirit of violence and rebellion Peter trapped on a bridge all the way back in book one. Whatever Chorley’s planning, Lesley is an integral part of it.

Honestly though, I have no idea what Lesley wants. When she defected she was angry. Now, she seems to have drunk the Kool Aid and I just don’t get it. She tells Peter that Chorley’s plan will make life better for everybody, but I don’t get why she believes that. Chorley’s plan is stupid. Yes, it’s got some exciting world building potential if it succeeds, but as a plan it’s stupid because (as the books have been consistently keen to tell us) life is messy and people are not neat little packages to be tied up with bows. People get hurt. I find it difficult to believe Chorley thinks his plan is a good idea which is going to have zero unintended consequences, let alone Lesley.

I am super not here for the date retconning. I’d also love somebody to quietly remove some of the geeky references.They’re not as egregious as in Foxglove Summer, but I feel a character who hasn’t picked up a book for leisure in seven novels is unlikely to make references to Biers.

When I look at my scores, I tend to rate these books as 3 stars which doesn’t seem really fair as they are definitely ones I read slowly because they’re too good to be over quickly. As I say, they are very, very readable. I want to know what happens, even though I complain afterwards. That said, I’m not thrilled by the note we’re left on - I came here for the very secret magical society which is trying to keep itself out of the official paperwork of modern policing and that’s increasingly being left behind.

So, yes, I enjoyed it. Newcomers should definitely start with book one - if you’re not invested in the series you are not going to get this in the slightest. I know I’ll read the next. Even so: