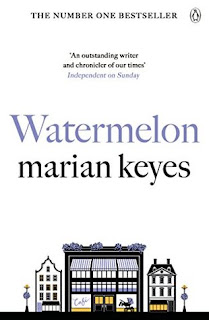 Looking at the scores I tend to give Marian Keyes, one could be forgiven for thinking I didn’t like her books very much. Actually, I do. I like her very much. In times of crisis, when my head is elsewhere and things are (hopefully metaphorically) on fire, I reach for Keyes. Ditto Sophie Kinsella. I have the same problem with The Hunger Games books - I didn’t rate them terribly highly but I’ve read them in hardcopy and audiobook form half-a-dozen times. So, although I must have read this several times over the last few years, I’ve never written a review of it.

Claire Walsh has had an eventful day. Not only has she given birth to her first child, her husband has up and left her for the downstairs neighbour. So, in full Scarlett O’Hara mode, she heads home to Tar- to Dublin, baby in tow. Shenanigans ensue.

Watermelon was Keyes debut, first published in 1995 - the year Bridget Jones’ Diary was first published in the Independent - before chick lit was even a thing. I’m not sure who actually bears the credit for inventing the genre, but there’s probably a good case to be made for this book being one of the first. Some staples of the genre are here: the chatty style, the smexy good times, the young lady getting her fella, but not the shopping, hateful office job and drinking culture which would come with Keye’s second novel.

Keye’s major strength is her writing style (which also extends to her Twitter account.). She’s got this pleasing, humorous intimacy, exactly like your best mate is relating what’s gone on with her recently (presuming your best mate is really good at telling a story). And Keyes is also brilliant at the supporting characters - Helen Walsh is a legend who only gets greater with each Walsh family novel while Mammy Walsh has her title written on her soul.

However, Keye’s writing has certainly got better over the years.

Too often the prose is broken down.

And let me tell you, it’s pretty tiresome.

It makes it look as though the formatting on my kindle has met with a hideous accident.

And then there’s Adam, hunky love interest. The development of his relationship with Claire is … troublesome. Claire, as might be expected for a woman who’s been hit with the “I don’t love you and I’ve already moved my clothes into the new apartment I’m sharing with Nice Denise” bombshell by her husband a few hours after dropping their sprog, finds it difficult to trust Adam. When he takes longer than expected to buy a cup of coffee, she becomes convinced he’s legged it and makes preparations to leave only for him to reappear and begin acting as though she’s spat in that beverage he’s clutching. What an insult! That she could think he’d do that! What kind of terrible person is she, to think something like that about him? It could be lifted straight from a book about a woman in an abusive relationship and made me want to tell him to get in the fucking sea.

More generally things feel convenient in the way of a novel - Claire can’t sleep so she cycles madly for nights and gets her figure back super fast, that sort of thing.

The main flaw is the one I have with all my least favourite Keye’s novels - the heroine has no direction. Claire has this terrible thing happen to her and this is the story of how she copes with it, but she’s not actively doing anything except getting through the days. It’s the same problem I have with Angels, and The Woman Who Stole My Life. Although they’re entertaining enough, they lack the drive (and subsequently the stakes) of her best work: Rachel’s Holiday. Claire has no fail state to avoid.

If you’ve never read Keyes, do yourself a favour and don’t start here, but if you enjoy her it’s worth picking up. It shows the promise of what Keyes would go on to become: a really good writer who is worth reading even at her weakest. And a really good place to go when everything has gone horribly wrong.