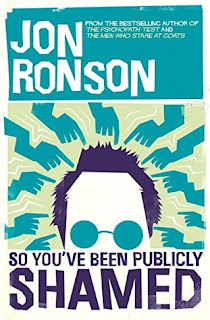 When I recently reviewed Jon Ronson’s Podcasts, The Butterfly Effect and The Last Days of August, I commented that Ronson tended to feel on the side of the called out, having sympathy for the victim of the pile but not those damaged by their words and actions. I specifically pointed at this book, So You’ve Been Publicly Shamed as being guilty of that. However, it struck me afterwards that it had been a good while since I’d read it and could very well be wrong. This is a review of the re-read.

Spoiler Alert: I was not wrong.

So You’ve Been Publicly Shamed is about the way Twitter and the internet has become a tool for holding people to account. Ronson speaks to various people who’ve had their lives “ruined” by online justice mobs, for serious transgressions or simply for poor attempts at humour.

First up is Jonah Lehrer, who was exposed for fabricating quotes and recycling much of his own work in an act of self-plagiarism. Ronson talks to the journalist who made the connection and it’s a fascinating section, the torturous responsibility of this knowledge, the reluctance to bring Lehrer down. But at no point does the idea that Jonah Lehrer is responsible for his own choices and his disgrace was a consequence of them raise its head. This very simple idea that if he, oh, I don’t know, didn’t make things up wholesale then there wouldn’t be an issue, never occurs. Instead, the media reaction is extreme, overdone.

And so it goes on.

A story which I remember being superbly narked by the first time I read the book, as well as when it was actually it the news, is that of Adria Richards who overheard two men making inappropriate jokes during a conference lecture about how to get more women into tech. She tweeted about it, the men were identified and after a public outcry, fired. Cue a counter outrage leading to her own firing. Unlike the men involved, by the end of the book she is still unemployed, yet that angle feels under examined.

Look. I write code. What do you think every stupid joke about big dongles, or “I’d fork that repo” or that girls writing code meme does? Or last weeks’ “men posing with booth babes” fest on twitter? A clue: it does not make this easier. It quietly takes a spoon and when I am out of spoons I will just… stop. And then you’ll wonder why your app doesn’t work for women, or why your soap dispenser is racist. Ronson actively makes this choice not to criticise the actions of any of the people he profiles but when they are part of a systemic problem with an industry, I find it really difficult to go along. In not saying anything, it’s hard not to draw a moral equivalence between making those jokes and pointing out they’re not okay.

But really, the whole thing feels artificial. Like The Butterfly Effect, the journey feels pre-ordained, as though he had all his candidates ready when the book was pitched to the publisher. There’s no organic sense of discovery or investigation. Instead of digging a little deeper, it’s just on to the next. There are plenty of branches which could have been taken - why do companies cave to public pressure instead of styling it out? Why are men allowed to be rehabilitated where women are not? Is this a natural evolution of the Dark Arts of spin? What role do news organisations play in framing the narrative? Instead of that, here’s another story about somebody who made a poor decision.

A book like this is always going to have a limited shelf life - the world moves on quickly and this was published in 2015. Attitudes change, technology changes. This holds up fairly well although one must wonder about the wisdom of attempting to rehabilitate one’s online reputation while agreeing to have an incident documented in a prominent journalist’s book.

Ronson is a very enjoyable writer who tells a good tale and I appreciated the self-examination he brought to the early chapters. I like his work, but I’d like it more if it felt like he was doing journalism instead of recounting an entertaining story.