I swore I wouldn't request any more ARCs ever. I failed - The Unlikely Adventures of the Shergill Sisters by Balli Kaur Jaswal 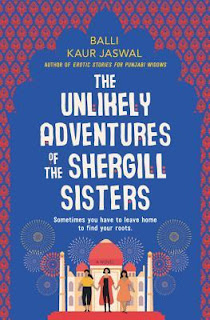 [I received this book as an ARC from the publisher for the cost of no monies. I thank them kindly for their unrivalled generosity. The Unlikely Adventures of The Shergill Sisters is out June 13th in the UK or now if you're an American.]

Rajni is the oldest of the Shergill sisters. She’s organised (bossy) and dutiful, so when her mother makes a deathbed request that she and her sisters pilgrimage across India to scatter her ashes, Rajni is the one to make it happen, despite her vow to never return there.

Jezmeen, a decade Rajni’s junior, has found herself unexpectedly free of work commitments over the coming weeks. A trip half-way across the world seems like a good as plan as any to let the fuss die down, re-group and work out how she’s going to re-launch her stalled acting career after what’s happened.

Sherina the youngest is quiet and good, a dutiful wife to her perfect husband, respectful to her in-laws. But their - and her husband’s - expectations of her are reaching a crisis point, and the time to make a decision is running out.

Billed as an Indian This Is Where I Leave You, The Unlikely Adventures of the Shergill Sisters is a really good read by an author who has the skill to write flawed characters I really connected with and never once felt like shrieking at. It sounds like such a simple thing but it really isn’t: kudos to Balli Kaur Jaswal for making it look so easy.

It’s an interesting read, rich with cultural detail deftly observed family dynamics. Rajni and Jezmeen dominate the first part of the story - they have plenty of problems with themselves and with each other. It allows Sherina to fade into their background, quiet, trying to get along with everybody, her problems unnoticed and unsuspected by her louder sisters.

However, I did find the premise and its implementation by Rajni a bit contrived. Each chapter is headed by their mother’s guidance notes, where they are to go, what they are to do, what she hopes they will get out of it. I am a big adherent of realism when it comes to found documents in stories so these notes seemed a bit too perfect, although they come into their own as the book goes on. Rajni’s dogged insistence that this show must go on to the end of the line lacked … something.

It also felt as though it lacked the space to breathe. Each of the sisters comes to the journey with their own baggage, they have their fractured relationship, there is What Happened when their mother died, and there is What Will They Go Home To. It’s quite a lot to cram in, and while the gradual unveiling of each story is done well, unspooling in ways I didn’t expect, the resolutions are hit and miss, feeling unexamined for a book which does family dynamics so well.

But, I did enjoy it, despite being unreasonably annoyed at a reference to cilantro (I await correction on what coriander is called in India). It’s funny at times although I’d pull a little short of calling it heartfelt. I think it has the bones to be a terrific film. I also feel like I’m going to get a lot more out of it on a second reading. If the blurb appeals, you should definitely read it.

Email ThisBlogThis!Share to TwitterShare to FacebookShare to Pinterest
Labels: ARC, Balli Kaur Jaswal, Chuddies is in the dictionary now, India, Read 2019, review, The Unlikely Adventures of the Shergill Sisters