For summer's parting sighs... - The Last Days of August by Jon Ronson 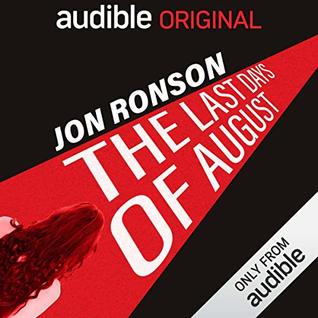 So, obviously, trigger warning on this for the hows and the circumstances surrounding it. It’s factual, but it’s also graphic due to a discussion of whether she could have taken such an action unaided.

The Last Days of August is just as gripping as Ronson’s previous podcast, but unfortunately has many of the same problems as The Butterfly Effect, and his other works.

Initially it’s really quite difficult to get on board with this. August’s tweet concerned a shoot she had pulled out of. In it, she “warned” whoever had taken on the job that the male actor involved also did M/M scenes. She then went on to defend herself against criticism by saying she was worried about catching something. In my view, these tweets are most certainly in need of criticism. The concern that your gloveless partner may pass something on to you should not be limited to those who have partaken in hot boy action.

But Ronson is not a journalist who pushes back and there is no comment passed on what August actually said, only the very clear idea that the criticism and “pile-on” of her was wrong.

It is a difficult line to tread. Ronson enters the story soon after August’s death. He’s invited to the Adult Awards to see her husband make his stand. It would take a greater jerk than I to point out to the freshly grieving Kevin that August’s critics had a point, or that Kevin’s speech reframes the narrative as a “my body, my choice” situation (which it sounds like it was - she didn’t want to do the scene, she pulled out of the job), but I do feel it was remiss and damaging of Ronson to take the line in his narrative that the “pile-on” was the crime. He has a history with this, in his book So You’ve Been Publicly Shamed? for instance, and he often remains a defender of the called out and does not acknowledge those who lives are damaged by the actions of those who have been.

Really though, especially in those first couple of episode, I wonder should Ronson have been there at all. The Kevin we meet initially is angry and grieving and striking out in a very public way. The Kevin interviewed at the end - a year later for Ronson’s recording - is a very different person indeed. Obviously Kevin did not merely agree to be featured, he was eager to have Ronson be part of his quest to bring the people he held responsible to justice - he initiated contact. Before the big speech, to his credit Ronson raises his misgivings, despite not knowing what will be said, only having been reassured that it will be explosive.

Ronson’s story leads away from Kevin’s targets of vengeance, delving into Ames’ life before and after she came into the industry, and it is a sad one. It is one, I suspect, could be told about many of the industry performers.

Although I found the whole thing fascinating, I feel there are ethical questions to be raised of Ronson and his producer. A man who contacts you a month after his wife’s suicide asking you to do a story on the cyber-bullying which caused her death is a man who may not be in the best mind to make such a decision. And although the quest ends up not being the story of cyber-bullying Ronson expected to investigate, he follows it, sometimes to the distress of those involved. It is a gossipy, addictive account which I could not stop listening to, but at the same time I wonder if it was a humanitarian thing to do. I feel sad for Kevin, for a lot of complicated reasons, but mostly I feel sad for August.

I’m left feeling that there are more stories to be told about this industry and Ronson is somebody whose telling I would listen to, despite my misgivings. He does not ask questions, or provide answers, but he puts facts together in a way that is addictive and compelling.