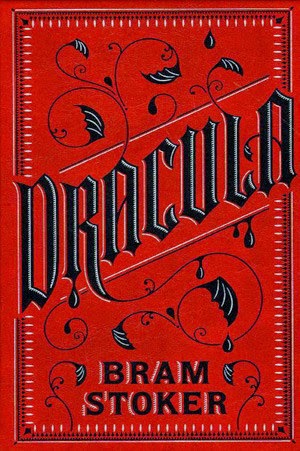 I've never wanted to read Dracula. Strider - my sister, so named because she had her legs stretched when she joined the circus so she could stride over cars and unicorns - was always big into Vampires; from Point Horror's The Return of the Vampire to Anne Rice (and the film, which I recently rewatched the first half hour of for the first time and suddenly understood why Tom Cruise was so cross about it given the views of his religion on those sort of matters). She ponced around Whitby in a black crushed velvet skirt and an old jet crucifix of our Mammy's no doubt feeling she had found her spiritual home. In the interests of not being unfair to her, I should mention that at this time I was rocking the type of clothing you can only buy in Glastonbury, muttering over lumps of rock crystal, and wishing I could put green streaks in my hair. I even had an orange dot energised by Uri Geller himself.

Left to my own devices, I probably never would have got around to reading Dracula, but I made the mistake of mentioning to my Mammy I'd never read it and compounded my error by allowing her to leave the house unsupervised before enough time had passed for her to forget that fact. She smilingly presented me with a copy, telling me it was really good. Unusually for me, I did not respond with the news I could have got it for free from Project Gutenberg but instead thanked her and settled to read.

A bajillion weeks later I managed to finish.

Normally I give classic books a bit of a free pass on matters such as language, or having an enormously tedious bit in the middle because while I enjoy complaining, I'm also British and don't consider it cricket to give out to somebody who's been dead for the last hundred years or so. However, I am not giving Dracula a free pass for the sexism and I do not buy that this is an accurate portrayal of attitudes at the time any more than I expect the me of 2114 to buy Stephen King's portrayal of Beverly Marsh and her amazingly sentient nipples in IT.

The first part of Dracula, Jonathan Harker's diary of his time spent in Transylvania, is good although the moment with Dracula's harem is just as porny as every TV, film, and game portrayal of it, which is actually quite an achievement. The book continues decently from there, with only minor eye rolling on my part, until the introduction of Van Helsing and his inability to say what the problem is. I've always found that getting people to do stuff is much more effective if you inform them of all the terrible things which will happen if they fail, or maybe I just like issuing threats, but clearly Van Helsing doesn't. I don't care when a book was written, if a character fails to mention crucial information but doesn't - and doesn't have a good reason not to - and bad things happen as a result, it's weak plotting.

From there, things get worse. We go from Everybody Loves Lucy to Everybody Loves Mina. I actually checked with my Mammy that she'd read this before the 70's because I honestly don't see how she could have tolerated all the "Let's not tell Mina about this, she looks so pale and tired and I'm worried her womanly brain may explode from all the knowledge", and the "I'm so glad the men won't tell me anything about anything. I am so glad they are all here to do the thinking so I don't have to" bits.

As with The Turn of The Screw, I enjoy the fruits Dracula's legacy far more than the original work which inspired them. I don't think it's worth reading today, but as the beginning was good I'm going to give it one star.