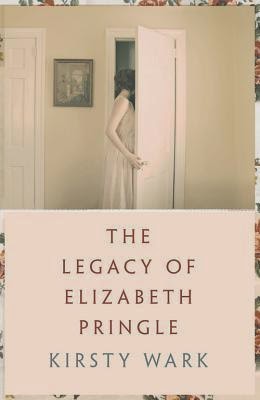 [With this post, I declare my personal Blog Blackout over. I thought about extending it to the 1st to keep in line with others, but from tomorrow I'm busy with Other Things, so I decided breaking early was better than breaking late on account of all the damage little old me is doing to teh authors. Why will nobody think of the authors? Anyway, this book was provided to me for no cost by the publisher, Two Roads, aided by Bookbridgr. I thank them, for both hardcopy and not sending Kirsty Wark to my home to find out why I hadn't got this reviewed yet.]

The Legacy of Elizabeth Pringle is the debut novel of the journalist and broadcaster Kirsty Wark (you'd have heard of her if you were British). She is intelligent, classy, and a generally all round good egg, which is why I requested it in the first place. She also had a cameo in the Doctor Who episode "The Poison Sky' according to Wikipedia, which tells you how highly she is regarded.

When 93-year-old Elizabeth Pringle dies, she leaves her house and everything in it to Anna, the woman who pushed a note through her door 30 years earlier asking if Elizabeth would be interested in selling. TIt is Martha, Anna's daughter, who takes shocked custody of the place; the house is an untold story, one which will forever remain so thanks to Anna's Alzheimers.

The book alternates between Martha - struggling with her mother, her sister, and this new property, the gift of a woman she's never met - and Elizabeth's memoir, the story of a long life in a small place she's desperate to set down before she becomes unable to. There is a lovely parallel in the unfolding of Elizabeth's story and Martha's gradual acquaintance with her through the Arran islanders who knew her, small details cropping up in Martha's chapters to be explained in Elizabeth's.

As you might expect from somebody of Wark's calibre, the writing is pretty good. There's the odd clunky paragraph, usually speech related, but the prose has a lovely subtlety to it which only becomes apparent when you mentally apply a Scottish accent. In the right vocal chords, I imagine this would be an excellent audio book. It's certainly something which should be read for long, uninterrupted periods, sunk into rather than dipped.

And this is because while lovely, and evocative, and interesting, Elizabeth Pringle lacks a strong plot. Any book split between two narratives in this way faces an uphill struggle to engage the reader because it usually takes twice as long for the book to get going. This one gives no impetus to either story. Elizabeth's memoir is exactly that, the story of her life, while Martha merely lives hers. Things happen, certainly - the relationship between Martha and her sister Susie over their mother is especially keenly observed - but there is little drive or tension. At no point was I waiting to find out what happened.

When the great denouement comes, it feels ... random. There is no particular build up, or the sense that this was the reason Elizabeth was writing her memoir. It's a shame, and I wish Elizabeth's actions following the event had been made more of. There is seriously under-utilised mileage in that particular idea.

The Legacy of Elizabeth Pringle is one of these books I could might well have given up on if it hadn't been an ARC, but one of the ones I'm glad I didn't. Sometimes a book turns out not to be right for me, the sack of meat and bitterness behind the keyboard, and I think there's certainly an element of that here. While slow, for me it was a solid three-star read. If Women's Fiction set on a remote Scottish Island appeals, I'd certainly recommend you download a sample.