It's ... okay. Just about. - Is Everyone Hanging Out Without Me? by Mindy Kaling 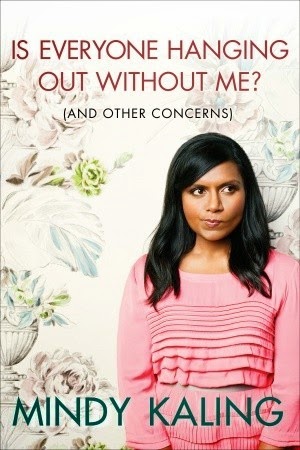 I only have the very vaguest idea who Mindy Kaling is. I do know this was a few books away from Hyperbole and a Half when I went to the library, and that I picked it up because I've seen it before somewhere. It was probably when Sloane Crosley's I Was Told There'd Be Cake was the Kindle Daily Deal. I didn't buy Sloane Crosley's book, mainly because I don't know who she is either.

Kaling, it turns out, is a comedy writer of high repute. She writes and acts in the US version of The Office. She writes and stars in The Mindy Project. Production/Direction/Generally Telling People What To Do is also involved. I use the present tense here but I've seen neither show so may be embarrassed to find she left in season 1 and is now fronting a campaign to give every child in America an oboe. Because she's a comedy writer of high repute she is therefore in need of a book deal, a sentence which tells you everything you need to know about this book.

Is Everyone Hanging Out Without Me? (And Other Concerns) is a collection of what other people call essays and, as far as this sort of thing goes, is actually okay. It doesn't start strongly: a chapter about Kaling's weight and how her hobby is dieting has the same lazy idiocy as the hashtag nomakeup selfie thing, particularly to me who is a UK 16 (US12) and only knows what Kaling looks like because there's a picture of her on the cover. After that though it gets better. Kaling has some fun - if privileged - childhood stories.

My overall impression of Kaling is of a person who is quite blinkered - she comes across as somebody who lacks empathy for other people; not in a bad way, just in a surprising way given that she's a comic. She doesn't seem ignorant enough for this to be a deliberate shtick. The adult perspective on childhood stories is missing, especially in one about a weekend friend who became a school time friend. Elements which seem obvious about the situation are missed in the way of somebody unaware of what it is to be somebody who isn't them.

There is the odd extremely problematic lines: "You should know I disagree with a lot of traditional advice. For instance, they say the best revenge is living well. I say it’s acid in the face—who will love them now?" Yeah, well, Katie Piper seems to be managing okay. See what I mean about the blinkered privilege?

Much of the book is enjoyable enough, even for somebody who has only the vaguest idea of the significance of Saturday Night Live, or who Kristen Wiig and Amy Poehler are. However, it does read - especially in the final couple of sections - as though Kaling is casting around for ideas to make her word count. She does it well enough but it smacks of being phoned-in, a product which exists purely to trade on Kaling's name. And while it would be fair enough to go 'Well, duh! What did you expect?', the answer is, 'I expected that somebody who writes for a living would do better than this diverting but not terribly funny and ultimately rather self-indulgent book.' 3 stars.

Email ThisBlogThis!Share to TwitterShare to FacebookShare to Pinterest
Labels: Comedy and Humour, Is Everyone Hanging Out Without Me?, library books, Mindy Kaling, review, TV Peoples