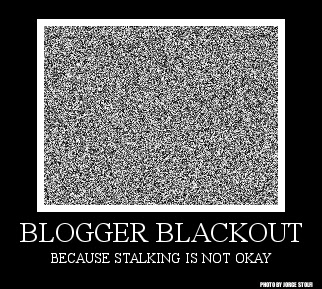 I don't use Twitter much. I find it too much of a time sink; it can take me 5 minutes minimum to read and respond to a Tweet (I'm dyslexic). Yesterday, though, I was keeping an eye on #HaleNo and I ended up having a conversation with an internationally bestselling author about the proposed blackout. She argued that it would be hurting a lot of authors who had nothing to do with Hale, and she's right - in a way - it will.

When I began the conversation, I wasn't sure what my position was going to be. I agreed with the blackout but I wasn't sure if I was going to join in. I'm horribly behind on my ARCs and I've got 2 reviews which I was intending to get finished and post ASAP - if I join in with the blackout, I am actively punishing these two authors (if you will excuse me the ego trip of pretending anything I do makes a difference, especially to the two people concerned). It's going to effect another two authors who's books I need to crack on with and who I would make the effort to status update about because I am so horribly behind. It's going to effect another author, because I started their book last night and am really excited that it's going to be good and if I join the blackout, I can't say anything about it.

I don't know what any of these people think about #HaleNo. I haven't looked. It doesn't actually matter because this is not about them. As I said to the IBA on Twitter, when nurses strike it's not done to hurt the patients. As a blogger, I hope that authors understand why we're doing this and that they offer to support us. We all have our own reasons for doing this. These are mine.


So, here it is. With regret, until the 27th I will not be posting any reviews of new books, or status updates about the ones I'm reading. I apologise to the authors whose reviews are being further delayed by this action.

Questions, discussion etc welcome in the comments.
Posted by Dor at 11:11