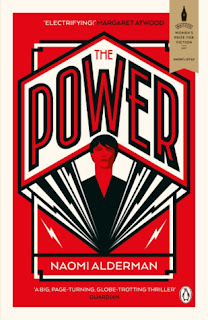 Cosmopolitan magazine describes The Power as “The Hunger Games crossed with The Handmaid’s Tale”. I assume the description was written by somebody who has heard of both of those things but experienced neither.

Teenage girls can hurt. Something has given them the power to generate electricity - a flick of a finger brings a target agony, or death. The power can be woken in adult women, too. And with power comes freedom.

I found The Power to be something of a mixed bag. Naomi Alderman splits her story between a variety of characters - a US mayor, a runaway teen, a Nigerian man who becomes the journalist charting the female uprisings, the daughter of an east end gangster - to give this story a world stage. This sort of structure is only as good as its least draggable character. Alderman’s… vary.

When it’s good, it’s brilliant. I have particular love for the snide background development of the CNN anchors. But in other ways it’s a touch weak - Roxy, in particular, feels, shall we say, underdeveloped when compared with the creations of an author like Martina Cole, who specialises in the gangland culture Roxy supposedly hails from. Her transition from being her father’s daughter to the place she ends up feels inauthentic and suspiciously easily achieved.

I also felt like it was weakened by its adherence to its story, which drives toward a particular crisis point losing some sense of the organic in its desire to adhere to its central idea. And in spreading the story so widely across the world, it left gaps. All the small human questions I had were overlooked, or dealt with in the briefest way. Obviously it would be a ridiculous - and extremely long - book which had some kind of checklist to ensure all points of view were represented, but still, I was never quite sold on the idea that the universal response to the gaining of the power would be to use it, as though our inability to cause harm is what stops us from ruling the world. Most women have the ability to pick up a chair and whack somebody with it, but we don’t, because… it’s illegal? Or because it’s really mentally difficult to physically hurt somebody, even when we are threatened ourselves? (The effect on women of causing this hurt is touched on very lightly) Or because a lifetime of indoctrination (that we don’t run, we don’t shout, we are nice and neat and polite) does not evaporate with the ability to zap somebody, whatever your culture.

Women are their own jailers as much as men. The Smurfette Principle (the idea that there can only be one woman in the room) makes us compete against each other for that single available space, so we put each other down and we define our value by how much the boys like us. That was the biggest gap in this book: the LadyShields; the Anne Coulters and Kelly Ann Conways; the blonde soccer moms who warn their sons to be careful because girls will lie about them to ruin their lives.

It also, understandably, steers away from what could have been a controversial and badly handled element: transgender people. Transgender people should exist in this novel, even if only as a background story, but they don’t. All of this said, it’s the mark of a good book that I’ve got all of these What about…? scenarios to complain about - I’m engaged with it.

Overall, I did enjoy it, very much. It should be a definite read for fans of The Handmaid’s Tale - Atwood is Alderman’s mentor - not only for the feminist dystopia element, but because of the way Alderman has used reality. She’s taken her cue from the history of female oppression and applied it intelligently to her world. It makes for difficult reading at times.

The best dystopian fiction is a mirror and we are not wrong to be afraid.