A Butterfly Faps in New York... -The Butterfly Effect by Jon Ronson 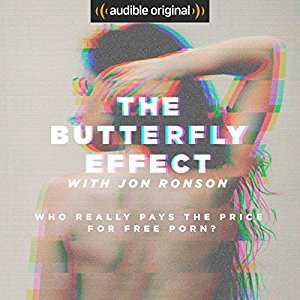 Technically, this isn’t a book, it’s a podcast, but it’s available for free for those with an Audible subscription, so it counts. Sort of.

I, too, was a teenager in the 90’s and remember the dark days in which Fabian’s dream grew. Those lucky few who had Sky TV installed would immediately be asked if they received the German sex channels and a mental note subsequently made about whether one should begin being nicer to them. My first job was as the Saturday girl in a paper shop where every week a man who lived with his mother and looked like Michael Gove after 20 years of pie would buy a wank mag and smoothly stick it in his copy of The Telegraph for his walk back up the hill.

I’ve listened to few of Audible’s free shows but I’ve never been very impressed (I like audible, but their original content is not great) so I had few hopes for this, despite enjoying Jon Ronson’s books and journalism. I was wrong. As I got to the end of each episode I was fastforwarding through the credits to get to the next. It is fascinating.

Ronson is a British journalist, not a thousand light years from Louis Theroux, whose previous work has included Them: Adventures with Extremists, and The Men Who Stare At Goats (made into a film with George Clooney). He’s a pretty good host for this journey and comes across as somebody who finds it all as fascinating as I do. He’s affable and has Theroux’s gift for taking anything anybody tells him with equanimity.

But Ronson is a listener. Unlike Theroux, he doesn’t push back, merely asks people for their stories. When his questions are included in the recording, they tend to be seeking an expansion of information rather than challenging their view or finding out more about why they hold it. This is sometimes frustrating, especially when there is something blindingly obvious to be asked, and sometimes problematic, because Ronson does have an agenda. You just don’t know about it until the final episode when he takes all he has found out and “confronts” Fabian, the man who dreamed of free porn, with everything his dream has “caused”. I am especially troubled by the implied connection between a man’s suicide, the Ashley Madison hack, and Fabian’s websites. It was not the only thing.

In the most frustrating part, Ronson challenges Fabian about the copyrighted work which is on his website. Fabian rejects the idea he is a thief - he has not uploaded it, users have, and if the makers want it removed then here is how you do that. It’s totally not Fabian’s fault that the site users don’t care about copyright. Except it is. The site owner is responsible for what is on the site. And Ronson doesn’t point this out, he doesn’t bring up comparable issues, like The Pirate Bay’s legal battles - it’s just… welp.

Then in an attempt to show it’s not all bad, Ronson presents something good he found in the industry. A group of people who act with incredible humanity and compassion to try and help somebody they don’t know and will never meet without asking for payment or even knowing if it will be received or do any good. Which, you know, is gives-me-hope-for-humanity levels of kindness, but hardly unique to the industry. It feels very much as though Ronson knew before he started what he thought about this and didn’t bother to go over it much making the investigation feel like an exercise in fulfilling a contract. Which is coincidentally the same problem I had with his book “So You’ve Been Publicly Shamed”.

4.5 stars for the first 6 episodes, I’ll pretend that final one doesn’t exist.