Dated but Decent - Lucy Sullivan is Getting Married by Marian Keyes 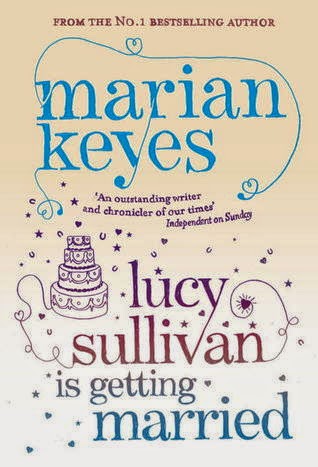 As I believe I've mentioned, I have an ARC of Marian Keyes' new book, The Woman Who Stole My Life, but because it's not out until Novemeber, other ARCs are getting read first. In preparation, I decided to reaquaint myself with whatever the Library had of Keyes' older novels: Lucy Sullivan is Getting Married is Keyes' second book, first published in 1995.

Lucy Sullivan is what would later become the typical Chick Lit heroine - 20 something, office job, boyfriend woes; likes drinking, fashion and shoes; her friends (and frenemies) play a large part in the book. It's worth remembering this was published the year before Bridget Jones' Diary and three years before Sex And The City first broadcast.

When Lucy and her colleagues visit a fortune teller, Mrs Nolan, Lucy is told she'll be married within the year. After the others' fortunes appear to come true - Meredia coming into the princely sum of £7.50, and Meghan suffering a massive split ... to her lip - Lucy is ready to believe it, especially when she meets charming, handsome, unreliable Gus.

Everything which came later in the genre would have you believe this is your typical cheesy romance, that Lucy muddles her way through trying to find Mr Right until she finally finds him in an unexpected place, but this is Marian Keyes, and Marian Keyes - like myself - always has one eye on the realm of mental illness and its associated issues. When Lucy sees Mrs Nolan, Mrs Nolan sees somebody with a great darkness in them, and this is a large part of why Lucy - sufferer of Depression since her teens - is convinced Mrs Nolan is the real deal.

Initially, the book is slow. Lucy spends an inordinate amount of time cringing, feeling embarrassed, apologising, feeling worthless, and generally being fairly annoying. She is, in many respects, a doormat. She's also immature: her relationship with her Mammy (which I initially disliked, I will freely admit, because it reminded me so much of Strider's relationship with our Mammy) left me wanting to tell her to grow up and stop being so petulant.

But, at 2/3rds in things take a change and every annoying, petulant utterance Lucy has made in the preceding pages slots neatly into place. She's no longer somebody you wish would grow a backbone and stop putting up with so much crap from so many different quarters - well, she *is* - but somebody who has behaved the way that particular person would behave. Marian Keyes knows her stuff. There may be jokes, and ridiculous characters, but there are still punches and more fidelity than the fluffy pink cover would have you expect.

Although the bones of the story stand up pretty well for its age, the are some major aspects which don't. Lucy's situation, for instance - her flat on her job is a pipe dream these days, as is the ability to sit doing nothing all day without being fired. It suffers what I shall christen 70's Sitcom Syndrome: there are some lines which make for uncomfortable reading in this modern and enlightened age - a male character calls a woman a dyke because she hasn't succumbed to his charms, for instance. Some of the banter between the characters, male and female, is viscous rather than amusing - Lucy's relationship with her flatmates is a great example. Lucy and Gus's interactions - again, Lucy is a doormat and the reason for it is there, but I think the current generation of 20-somethings will have less in common with this character than her contemporaries did, and perhaps have a more difficult time grasping the (unmentioned) fact that Mental Health was talked about even less in those days.

The most damning matter for me was Gus. He is a knobhead. From the second Lucy meets him, he is a knobhead, and because Lucy is such a doormat I would forgive anybody who flung this across the room in irritation and went and found a book about somebody with an ounce of self-respect.

In the end, I did like it, but for a fairly large portion of the book I didn't. The payoff was worth it to me, but if you're under 30 and you don't have an interest in books which deal with Depression and its associated Jazz, there's not a great deal here. Even if you do fulfil those requirements, it remains something of a curio best left for Keyes' fans. Three star books do what I expected them too which this didn't, but in the end did.