As you do - Round Ireland With a Fridge by Tony Hawks 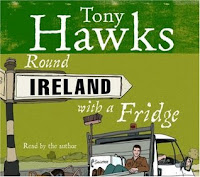 Tony Hawks (not to be confused with the pro-skateboarder), having recounted an amusing anecdote to his friends about seeing a man in Ireland attempting to hitchhike with a fridge, accepts a challenge to do the same. If he can get around the coast of the Republic, with a fridge, in a month, he will win the grand sum of £100. Less than the fridge he’s travelling with ends up costing him.

This is a bittersweet one for me. At the time of writing, I’m going to hit the first anniversary moving back to the UK having lived in the Republic since 2003. The Ireland I lived in was very different to Hawks 1996 version. Hawks book takes place in that short space of time when mobile phones were a thing for professional people but the internet hadn’t made the average home (well, not my home, anyway). Post Riverdance, but pre Celtic Tiger and Good Friday Agreement.

A travelogue this is not. This is the story of a wacky journey. While Hawks begins with a degree of engagement, visiting the King of Tory etc, the journey grows increasingly more concerned with recounting Hawks’ stagger from pub to bar to roadside and back again, until it’s just a case of making it back to Dublin. The Cork-Waterford stretch is a couple of hours he spends in a car. His time in Wexford Town (which he insists on referring to as Wexford, annoying me terribly) is mainly about his seduction of a lady.

There’s a lot of that - Tony attempting to chat up ladies and failing - and post #meToo it feels more than a little creeptacular. His continuing lamentations that a particular lady hadn’t called him don’t do much to improve matters.

I listened to the audiobook, read by Hawks himself, and he’s a terrific reader who makes a decent stab at the accents (if not the Irish regional variations), although he’s more occasionally-raise-a-smile funny rather than actual laughter funny. He’s pleasing.

These sorts of books always need to tread carefully with me. They’re so often written from the perspective of this everyman who just happens to be taking this wacky, wacky journey when, in reality, they have the financial backing of a book deal or a comedy tour from the get go. Hawks is open about the support he receives from the (late) Gerry Ryan and his morning radio show, but I suspect there would have been less support if it truly had been your everyman performing the stunt rather than a comedian with a decade strong career. Behind almost every viral internet sensation is a promotional algorithm which has been paid for. I like my wacky journeys with appropriate amounts of disclosure.

So, the first half was pretty good, but the whole thing got more and more repetitive as it went on. Although I find Tony Hawks very easy to listen to, I honestly can’t see myself replaying this or checking out his other work. I can’t recommend it as something funny, or interesting, but his voice is extremely soothing.

Email ThisBlogThis!Share to TwitterShare to FacebookShare to Pinterest
Labels: 2 Stars, 2019, Audiobooks, Ireland, review, Round Ireland With A Fridge, Tony Hawks