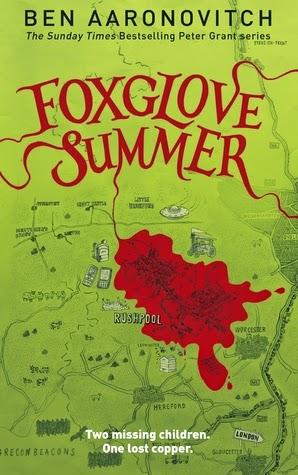 Although I like it, Ben Aaronovitch's Peter Grant series has been a bit hit and miss. The first, Rivers of London, was an absolute stonker - think Neil Gaiman's Neverwhere as a police procedural. The second, Moon Over Soho was slightly dire but managed to redeem itself with a lively final third. Book three was better, book four a bit better than that (provided you have my interest in urban architecture). Foxglove Summer, the fifth entry in the series, is no worse than the previous two.

London copper and apprentice wizard Peter Grant has long since learned not everything is as normal as he used to think it was. This week he's learning that The Folly, the supernatural branch of the Met, takes an interest in missing child cases, just to be sure they haven't been spirited away by anything Grant will only find out exists now. So when schoolgirls Nicole and Hannah leave their beds in the middle of the night, Peter's off to the countryside to interview an old acquaintence of Nightingale's, just to be sure there's nothing 'Falcon' going on. And since he's already out there, Peter volunteers to help the West Mercia Police with their investigation, an offer the overstretched rural force is keen to accept - and not just to show the doorstepping national press that yokels can do diversity too.

The strengths of the series are intermittently out in force: the fun to be had from somebody trying to negotiate the line between getting the job done and filling the paperwork out afterwards; the blending of traditional folklore with the series' rather more modern take on it (high fives for diversity and a pointed look at every fantasy author who's proffered excuses for the majority of white maleness in their books); some great back-and-forth dialogue; and although it's slow in parts, especially at the beginning, when the story *is* moving it's so terrific I risked hideous sunburn to continue reading.

But the weaknesses are there too, especially Aaronovitch's continuing inability to write a convincing relationship. I'm not looking for great romance here, I'd just like a sense of what either of them see in the other beyond a keenness to get carnal. A supernatural moment between the two is incredibly unpleasant but because of the simplistic way we view men as creatures whose interests begin and end with whether they get to have sex or not, it's written in a positive light.

It's frustrating because Peter's laconic narrative doesn't preclude emotion. There is a moment with a tree which is so perfectly done, which shows the underneath parts of Peter so much more effectively than his articulating them would do, that it becomes all the more frustrating for it be placed alongside a relationship which is little more than brief descriptions of energetic lying down.

I'm also having problems with the world building. Each book brings new ideas, often very good ones, but I sometimes feel it's at the expense of developing those already established. And while Foxglove Summer does give some series arc related insights and hints of things to come, those aspects remain very much a sub-sub-plot. I don't feel like we're moving towards a predetermined idea in which all the pieces will suddenly come together and have me scrambling to re-read the series.

While I really liked the premise, the whole thing felt under-done. Removing Peter from London gave some freshness, but not quite enough. The ending itself is horribly rushed, to the point that I feared a cliffhanger approaching. There wasn't, but that would almost have been preferable.

I do like this series and I will certainly be reading the next one, but despite this I can't recommend it (beyond the first book). If you don't like what's gone before there's nothing here to change your mind, but if you do like it this is engaging, occasionally tantalising, and hugely frustrating in equal measure.