If this were a film, I'd want Duncan Jones to direct it - The Explorer by James Smythe 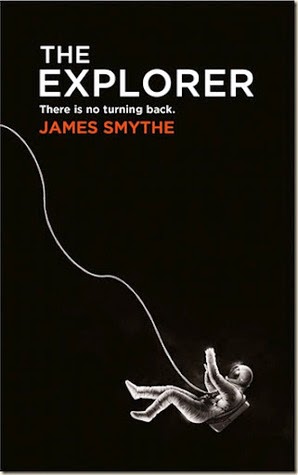 If you asked me, and I've no reason to suppose that you wouldn't because I'm fairly anti-social and all your attempts at conversation would meet with bored glances until you got onto the subject of books at which point I would become sufficiently enlivened to answer the questions you would surely be asking if you weren't concentrating quite so hard on backing away slowly, I'd tell you I don't like sci-fi books. I don't know why I think this because I can't think of a sci-fi book I haven't enjoyed. What I can think of are a few dozen books I've read the blurbs of at the library and put down again because I'm prejudiced against books in which the protagonist's name scores more than 38 points in Scrabble.

The Explorer is the story of a journey. Mankind go into space. They will go out, they will turn around, they will come back triumphant. Our protagonist is Cormac Easton, a journalist who's on the crew to provide the people back home with the story. He is the human in a craft staffed by highly trained boffins, one of whom is dead when they wake up after take-off.

The blurb of this one is at once incredibly misleading and incredibly accurate. It suggests you're going to get something action packed with Cormac trying to avoid dying - you're not. This is a tense, tightly plotted novel of the kind which doesn't make you wonder what's going to happen, it makes you watch as it does. I'm not going to tell you anything else about the plot because I think it would spoil it, I will however tell you that the blurb covers the first 20%ish *raises eyebrows in a significant fashion*

I'm not a big reader of sci-fi so I honestly don't know how it stacks up against the rest of the genre, but I would push it on people who like books about humans and their humanity. It's the big empty, close-up view of a person and their head.

If I have a criticism, it's probably with the story. I loved the way it was handled, the way it was written, but it's not terribly original. That said, it avoids feeling derivative and it brings its own identity to the party so I don't have a problem with it. I just like to complain.

I really enjoyed it and I'm looking forward to reading the followup, The Echo. Which I actually already have. Spooky.

(This review was originally posted on my Booklikes blog in April 2014)
Posted by Dor at 14:20