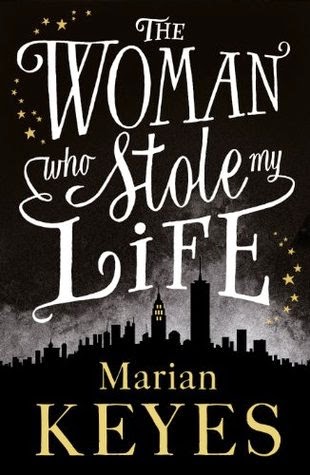 [This book was provided to me many moons ago by the publisher, Penguin, via the magnificence that is NetGalley. They charged me nothing and for that I thank them.]

I like Marian Keyes a lot. She's often maligned for being Chick Lit which is both unfair and stupid - while you don't have to like Chick Lit, you do have to not write off an entire genre. As I mentioned in my review of Lucy Sullivan is Getting Married, Keyes pre-dates Sex and The City and Bridget Jones by several years. She didn't single-handedly invent the genre, but she was an important step in its development.

The Woman Who Stole My Life is a pleasing return to form after the rather jarring The Mystery Of Mercy Close (which I'll mention I enjoyed tons more the second time around) and The Brightest Star In The Sky, which left me wanting to throw it (it's decent enough, but a book which turns out to be narrated by the spirit of an unborn baby waiting to find out which lady's womb it's going to settle down into makes me stabby. Full marks for originality and all that, but it's worth mentioning that abortion is illegal in Ireland so I have trouble regarding an unplanned pregnancy with anything other than horror).

Stella Sweeny has returned to Dublin under a cloud following a year in New York as a lauded self-help author. Now broke, she's desperate to get another book out, but that's going to involve laying off the wall of jaffa cakes and actually writing the thing, a task she's finding far more difficult this time around.

Keyes uses the structure which has worked so well in previous novels such as Rachel's Holiday and Anybody Out There?: a first person narrative beginning after the fact, the day-to-day story around which the past unfolds. Stella's story has a terrific concept and Keyes' does great work balancing the distress of the character with the levity of the style. She has so many throwaway moments, so many tiny details of life in there. Her characters are both human and ridiculous - Stella's ex-husband Ryan is the exactly like somebody I know in real life (which made me terribly sad, and a little grateful his kidders are boys).

I like the Irish vernacular - when you read as much as I do, anything which stands out a little is gratefully received. This isn't the full Dub, but there's plenty of 'That's gas,' and 'gameball' floating around, along with the odd nun reference which, as a Protestant Atheist, I find minorly thrilling.

There are problems, the largest of which is the story. Along with the present in which Stella desperately tries to write her new book before she runs out of money, there are two main sections: Stella's time in New York and the events which led to her being there. Both are good, but the ending feels desperately weak. Keyes usually gives us characters who are dealing with something - Helen and her Depression, Rachel and her drug addiction etc - but Stella isn't doing that. She's procrastinating and worrying, sure, but most of what happens in her present is filler - completely appropriate and wildly entertaining, but nevertheless filler. When the full story is finally given, that's pretty much it. I genuinely wondered if my ARC was going to have its final chapter missing because I was down to the last few percent and still dealing with Stella's past.

And while Stella herself is an excellently done character, she's not the best type to have at the heart of a book. She is a passive character - the direction her life takes has little to do with her own decisions or efforts. She is a passenger in her own reality. Keyes knows this and uses it to brilliant effect, but it still leaves for a disappointing reading experience. I understand and sympathise with Stella, but I was never urging her to succeed.

I enjoyed The Woman Who Stole My Life (and I learned something, which is always nice). If you haven't read any Marian Keyes this probably isn't going to turn you onto her, but it's a good book for those who do, if probably not worth the full price of admission. A goodly amount of my like comes from the coverage of Stella's life as an author which - as with The Other Side Of The Story - engaged me. The majority of the book was a solid 3.5 star, but that ending is massively undermining: 3 stars.